How the LGBTQ+ Community is Shaping Climate Activism

As part of LGBTQ+ History Month, we wanted to share with you some present-day climate activists that inspire us here at Shrub. The first of which is Jamie Margolin, who has co-founded a climate organisation, sued the state of Washington and spoken in the U.S. Congress - all before the age of twenty. 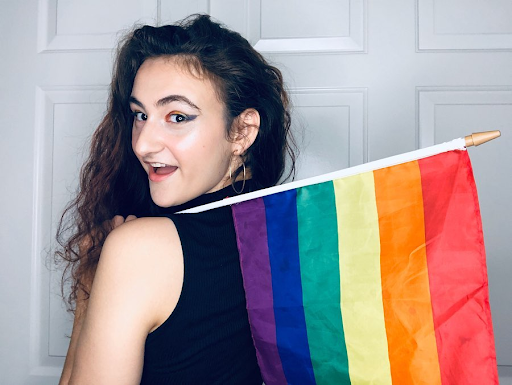 Jamie Margolin advocating for sexual and gender rights, as well as paving the way for climate action amongst young people.

Jamie Margolin has become an internationally-recognised name amongst the climate justice movement through her outspoken leadership of Zero Hour, an organisation focused on educating young people about the climate crisis and mobilising them to demand action from their leaders. At only fourteen years of age, Margolin began to campaign for the right to a clean and safe environment after spending many summers in Seattle afraid to go outside because of the smog and pollution. She was enraged that her generation were forced to accept these conditions as ‘normal’, despite having done nothing to create this problem. Margolin therefore began to connect with other young activists in the Pacific Northwest, testifying at climate bill debates to bring attention to these issues. When she grew tired of waiting for adults to take action, Margolin set about organising a youth climate march so that young people’s voices would not go ignored. From here, Zero Hour was born.

During this same period in her teenage years, Margolin attempted to sue the state of Washington for failing to provide the youth with a safe and healthy environment to grow up in. The case argued that this deprived them of their constitutional right to life, liberty and the pursuit of happiness. Though they were ultimately unsuccessful, Margolin has harnessed this experience to further demonstrate the need for youth leadership and affirmative action on climate justice issues. As a result, Zero Hour has gone from strength to strength, being featured on news outlets such as CNN and gaining the support of celebrities such as Chris Evans and Samuel L. Jackson. Alexandria Oscascio-Cortez has also been an ally to the movement, and she even invited Margolin to speak at the U.S. Congress to voice her support for a Green New Deal. A rather impressive list of achievements at such a young age.

As a Jewish, Latinx lesbian, Jamie Margolin has stated that it is her complex identity that has shaped her commitment to the climate justice movement. She has spoken about how her experience ‘coming out’ was one of the greatest challenges she had overcome in her life, but that she used her talent for writing to articulate to her friends and family this element of her identity. She has since gone on to write widely about the various dimensions to climate justice, recognising the power of communication from her experiences as a member of the LGBTQ+ community. She has highlighted the legacies of colonialism and capitalism in creating the climate crisis, as well as the heightened vulnerability of women and people of colour to climate disasters, drawing attention to the ways in which the climate crisis makes the vulnerable in society even more vulnerable. Her book Youth to Power, published in 2020, provides a detailed guide on how to engage in intersectional activism, encompassing her core values and mission.

Through Margolin’s experiences and work, she has emphasised the importance of placing social justice at the forefront of climate change solutions and during LGBTQ+ History month, it is important to recognise how everyone’s unique experience can contribute to the fight against climate change. Margolin has worked to create an inclusive climate activist network and here at SHRUB Coop, we strive to do the same.